While we do our best to ensure that Manalyze is secure, we know that things go wrong from time to time. For this reason, we welcome your help in identifying possible flaws in the program and on this website, provided you do this in an ethical way and report your findings to the maintainers of this project.

This section contains instructions you can follow if you intend to fuzz Manalyze. In this example, lcamtuf's AFL is used and the fuzzing effort is focused on the PE parser. The following lines indicate how to get the latest version of Manalyze and build a minimal executable to fuzz:

Of course, you can edit the contents of main.cpp to call any additional function you want to fuzz: all this example does is load a PE file and parse it, before exiting.
The next step is to gather some PE executables which will be used as input files. Options include the handcrafted PEs from the Corkami project, as well as the files used by Foxglove to fuzz ClamAV. Assuming you put these input files in a folder called input/ and want to save the results in a folder called output/, use the following command to launch AFL:

From there, you should be good to go! 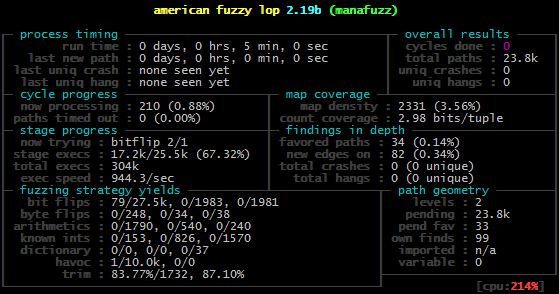 Should you find a bug, there are two ways they can be reported. The most straightforward one is to open a new issue on GitHub. If, for any reason, you feel that the problem you found should not be disclosed before it is fixed, you can also send a GPG-encrypted e-mail to the maintainers of this project. A link to the GPG key you should use can be found in the "Contact" menu at the top of this page.
<-- -->